What is Next-Gen Antivirus?

Next-gen antivirus software utilizes a combination of cutting-edge technology, such as machine learning and artificial intelligence, to effectively identify and eliminate threats to your business.

In order to achieve this, next-generation antivirus software takes an approach that focuses on behavior with algorithms that examine processes, data, application use, network activity, and user behavior to help spot unusual activity.

In contrast, a traditional antivirus relies on programmers to identify an attack after it’s hit and patch it after through an update to your platform.

How effective is your current approach to cybersecurity? Use our checklist, How Covered is Your Business, to help you identify the weak points in your security strategy and what technologies, tools, and policies you need to stay secure. Access the checklist here.

What is Next-Gen Antivirus?

Next-gen antivirus is the next wave of antivirus software to protect businesses from cybercriminals. It uses a combination of modern technology, machine learning, and artificial intelligence to improve the effectiveness of threat detection.

Related: The Evolution of Cybersecurity Solutions and Threats

Next-gen antivirus is a more proactive approach to cybersecurity that can identify network usage trends and learn from past breaches and attacks to improve security in the future.

Why Next-Gen Antivirus Has Become Increasingly Important for Businesses

The pandemic has seen a sharp rise in the number and severity of cyberattacks in order to access and steal your personal information like social security numbers, bank information, or private and work logins.

This surge in threats aimed at small to medium-sized businesses (SMBs) has made next-gen antivirus a necessity.

Along with the increase in attacks, the complexity of the attacks has increased.

Now, businesses have to look out for phishing, ransomware, malware, spyware, and more.

Staying ahead of cybercriminals is a tremendous challenge for businesses of all sizes but especially difficult for SMBs without strong cybersecurity strategies in place.

One thing is for sure: the traditional "set it and forget it" style of antivirus software approach is not enough anymore. 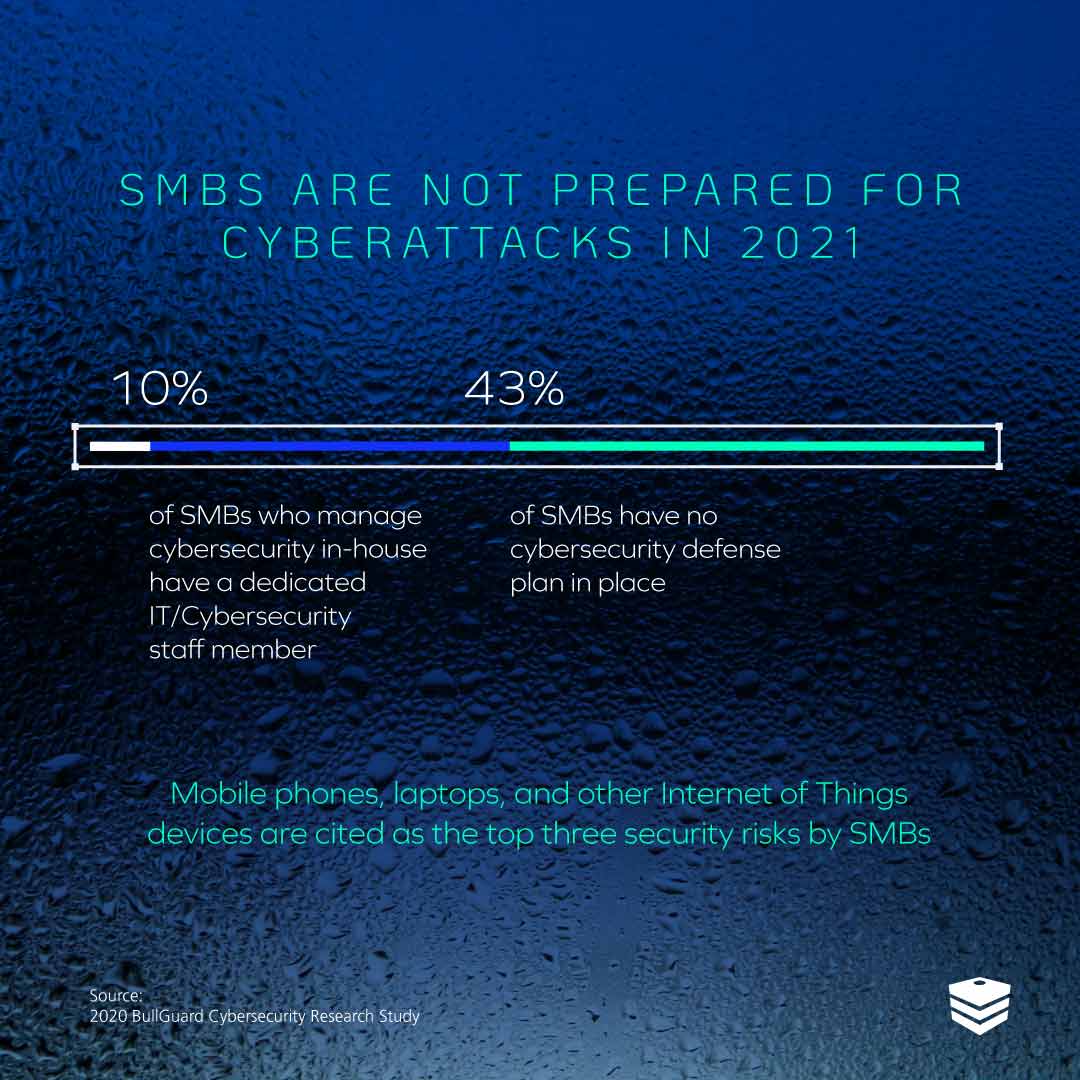 Why Traditional Antivirus is Not Enough Anymore

Modern cybercriminals are smart. So smart that they’ve invented new attacks specifically designed to defeat older systems with known flaws that, if old enough, are no longer being actively patched out and fixed. These new threats know exactly what areas to target, can quickly identify weaknesses, and easily penetrate those systems to infiltrate a business’ network.

Additionally, business systems are becoming much more complex than legacy antivirus software was originally designed to defend. Now we have remote workers (logging in from multiple devices on different networks), cloud-based data, and more connected devices.

Traditional antivirus takes a signature-based approach, meaning it would scan files for identifiers that matched known viruses, but modern-day attackers know how to disguise malicious code to bypass these defenses. Using new techniques, cybercriminals can now introduce malware without introducing new files onto a system or by using code that changes to remain undetected by signature-based detection methods.

Next-gen antivirus’ focus is using network events to identify malicious intent and behavior when compared to typical use of the network.

How Next-Gen Antivirus Meets the Demands of Modern Cybersecurity

One big hurdle next-gen cybersecurity must get over is the increasing number of connected devices that are connecting to a business’ network.

Every single device needs antivirus protection in order to keep the network safe, or else it risks being an entry-point and vulnerability for the entire network.

They simply aren’t equipped to handle what cybercriminals are able to throw at them in 2021.

You’ve probably heard of or used traditional antivirus software before.

Whether it’s on your home computer or at work, you’ve probably installed a form of antivirus on a computer before but what you probably didn’t realize was that this type of traditional software often requires user direction in order to take action.

This means that, in order for the antivirus to be effective, a user must initiate or schedule a device scan which not only takes time but also means that a threat may only be discovered after it’s been initiated or if the software is programmed to detect it.

If a threat is detected, the reaction is also initiated by the user.

This time-consuming set of tasks is difficult for businesses to keep up and adds an unnecessary layer of challenges, especially for businesses with lots of devices and endpoints.

These types of cyberattacks are unique in that they do not attempt to introduce files to a system, helping them go undetected past traditional software.

This is the biggest difference between traditional antivirus and next-generation: next-gen proactively (as opposed to reactively) protects you.

The number of endpoints existing within the network of an SMB is consistently growing and much higher than it was just years ago. Simply put, a traditional antivirus can’t keep up.

A next-gen antivirus solution looks for file signatures similarly to a traditional antivirus, but it also detects attacks by scanning for events, processes, and connections to seek out inconsistencies and irregularities within your network.

This makes it significantly harder for modern attacks to successfully get into your network.

Here are a few ways that next-gen antivirus takes cybersecurity to the next level: 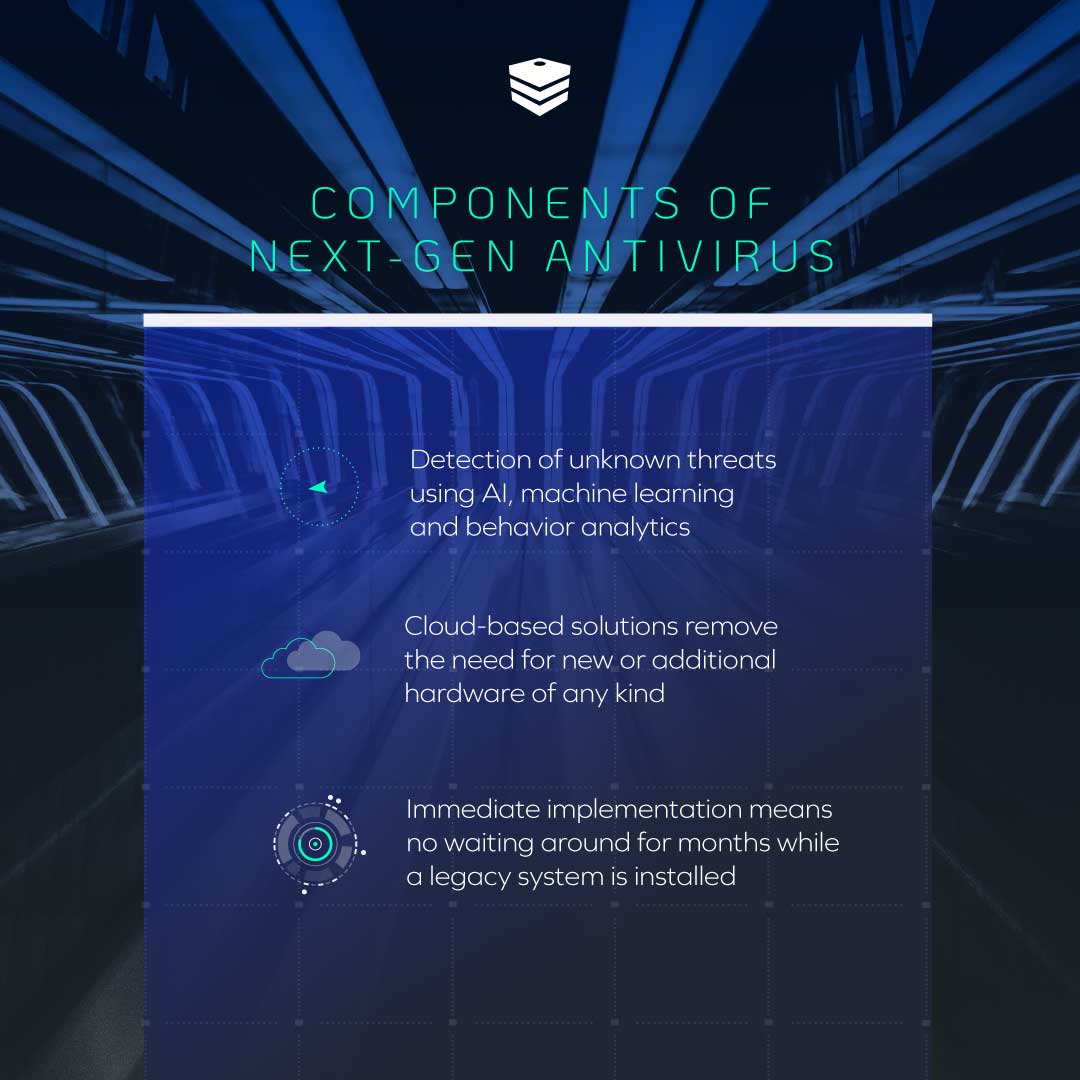 Do You Need Next-Gen Antivirus?

The world of cybersecurity in business is changing, if your antivirus isn’t changing with it then your business is in danger. Since the start of the pandemic in 2020, hackers have identified SMBs as a prime target for attacks because a majority of these businesses have outdated antivirus solutions.

Many SMBs are under the dangerous assumption that cyberattacks are mostly aimed at large corporations, which couldn’t be further than the truth.

Not only are SMBs targeted to virtually the same degree as enterprise organizations, but they don’t have the resources of financial capability to recover in the event of a breach. Unfortunately, this means many SMBs are unequipped to protect themselves.

One of the main dangers SMBs face is the result of the increasing amount of devices businesses have connected to their networks.

Rather than having a handful of computers accessing a network, modern businesses have hundreds of phones, tablets, laptops, and more connected every day.

This presents a security problem with so many potential points of attack.

It also presents one of the glaring issues with traditional antivirus software and its inability to proactively protect a business.

What if the Costs of Next-Gen Antivirus are too High for a Business?

For many businesses, the costs of achieving protection in the form of next-gen antivirus might make it seem out of reach.

With having to hire an entire internal security team and filling out and maintaining a technology stack to equip them with, the costs can add up.

Partnering with a managed security services provider (MSSP) like DOT Security means you get access to what you need and an expert team made up of:

A fully-fledged team made up of experts in these positions, consistent training, and required tools and software can make obtaining high-end cybersecurity an expensive feat if attempted in-house.

This is just one reason why many organizations are choosing to partner with MSSPs for their cybersecurity needs.

Keeping up with the latest cybersecurity threats can be difficult for businesses that don’t have large internal IT or cybersecurity teams. This is dangerous because cybercriminals are always adapting the way they attack networks and without updated defenses, businesses are leaving themselves vulnerable to these new attacks.

To see how covered your business is from modern cyberattacks, check out our new checklist which will help walk you through the required security elements businesses should have to stay secure. Access the checklist now.