What is a Black Hat Hacker?

A black hat hacker is what most people think of when they picture a hacker in their heads. They’re the classic evildoers who hack into business networks to cripple systems, steal data, and more. To stop them, businesses need to understand them.

Read on to learn more about black hat hackers, the means they use to attack, and what businesses can do to protect themselves.

The Definition of a Black Hat Hacker

Instead, a black hat hacker has only malicious intent and aims to do harm by stealing data for ransom, reselling, extortion, or something else equally villainous.

In terms of what they actually do, black hats and white hats achieve their goals using very similar means. Both will utilize the latest hacking strategies and technologies to crack the cybersecurity systems of businesses and people.

Related: What is a White Hat Hacker?

The main difference is what they do once they’ve broken in. While a black hat hacker now looks for ways to steal data, spy on users, activate malware, etc., a white hat hacker uses what they learned during the process to help the victim find weaknesses in their system and correct them for the future. 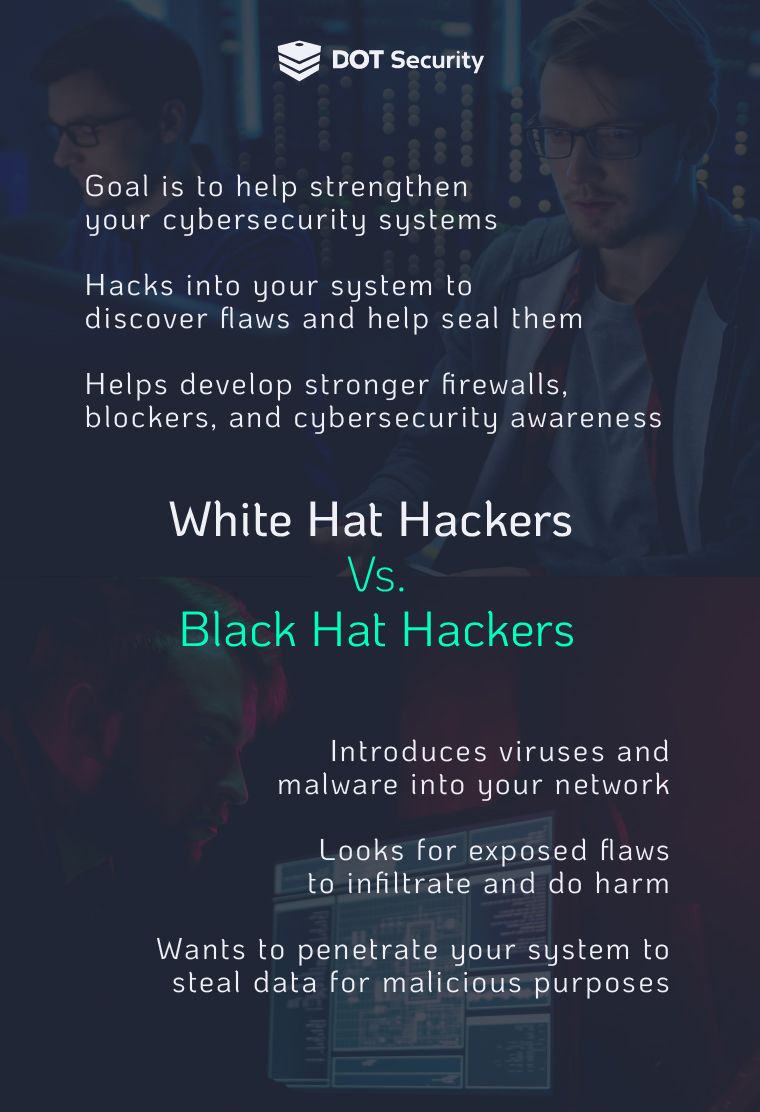 Other Types of Hackers

Additionally, there are a few other common types of hackers who have their own goals and motivations:

Red Hat Hacker: A red hat hacker is someone who attempts to stop black hat hackers through aggressive means like counterattacks that aim to destroy a bad actor’s resources.

Grey Hat Hacker: Grey hat hackers toe the line between good and bad. They hack into business systems the same way a black hat hacker would but with the intent of fixing the problem for a small fee. The reason this is a moral grey area is that a grey hat hacker does not act permission to do this like a white hat hacker and it’s not entirely with good intentions in mind. After all, if an organization decides they do not want to pay the grey hat hacker, that hat may turn black.

How and Why Do Black Hat Hackers Attack Businesses?

Black hat hackers will utilize every attack vector that they can to accomplish their goals. This means businesses need to not only be aware of the possibilities but be ready to stop them with proper cybersecurity systems in place.

Related: Cybersecurity Attack Vectors: What to Watch Out For!

Here’s a look at the most common methods that hackers are using:

For black hat hackers, there are multiple motivations for hacking into a business network, including:

With black hat hackers roaming the web, it’s never safe for businesses to let their guard down. It’s critical that they always have the latest cybersecurity technology implemented to mitigate the risks of an attack.

Is your business covered? Use our new checklist—How Covered is Your Business?—to see what cybersecurity measures you need to protect yourself from black hat hackers.